Getting Publicity and Working with the Media

In many cases, the success or failure of a local "grassroots" initiative rests upon whether or not the matter got favorable or unfavorable media coverage — or any coverage at all. A critical element in lobbying at all levels of government is the press. Love 'em or hate 'em, the press is a powerful force in a democracy and the better you understand them, the better you can "work" the media, hopefully to bring about a positive result for your boating issue.

Elected and appointed officials at all levels of government are very sensitive to press coverage. If a boating issue starts getting news coverage, local officials will not only take notice but are more likely to want to work with the boaters involved.

Conversely, no one in public office wants "bad" press, so the sooner an issue can be resolved before it becomes a bigger story, the better. This works to the boaters' advantage.

Who Are the Media?

Essentially any news organization that has a public outlet in your community is "Media"— a local newspaper, local or regional magazines (print media) and radio and television stations (broadcast, or electronic media), as well as the local cable TV service provider and any news services that might cover your area such as the Associated Press, States News Service or Reuters. While the mainstream media covers news, specialty publications such as newsletters, or TV shows sponsored by specific groups cover only items in their interest area or that adhere to their agenda. Your job is to convince local reporters that your issue has some news value.

Bloggers are taking on an increasing role in directing the attention of the public and policy makers to particular issues. Watch for bloggers who are quoted in newspaper articles or have their comments shared by a significant number of community members. Cultivating a relationship with this type of
"new" media should be a part of your efforts.

"Be careful what you ask for"you might get it!" When you are dealing with news people there are no guarantees that any coverage will be exactly what you wanted. Be prepared for the fact that any news story done on your issue may not be 100% of what you wanted to see in print or on television. In other words, the more you try to dictate to a reporter what the story is, the more they may feel they are being manipulated and you lose credibility.

Stick to the facts; present a reasonable case; don't complain or badmouth anyone; have plenty of background information ready to support your position; have other names and phone numbers handy if the reporter wants to interview others.

Keep in mind that reporters are professionals and the more you present a professional image the better reception you'll get. Before contacting any reporters or editors, some prep work is necessary. This can save valuable time and effort later. First and foremost is: compile a press list.

Simply, it's a mailing list, or an e-mail address group, or any other contact list – names, phone numbers, and addresses of reporters that you will use to publicize your issue. When your group sends out a press release, it will go to this press list.

Locate the contact information for the news outlets that serve your area. Check the phone book, local community guides, yellow pages and the Internet for names and addresses.

You should also consider getting the names of assignment editors, boating or outdoors writers, or TV/radio producers of local news. Sometimes calling the newspaper or station is the only way to get a name. Many papers now list a reporter's e-mail address at the end of a story or on their web site, so check those as well for useful names.

The more targeted your approach to a specific person at media outlets, the better chance your letter or phone call will not "fall through the cracks."

For example, a press release about boating is more likely to get picked up if it is sent to the Outdoors Editor than to the Executive Editor.

If you are asked to leave phone messages, don't be discouraged. Leave a short message. Try again another day or follow up by mail or e-mail.

Selling the Story to a Reporter 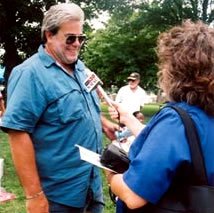 Generally what makes a good news story is controversy. Find an angle that makes your issue as interesting as possible and be able to show that many people may be affected. (One person complaining about a situation is not news; 30, 50 or 100 people, or local businesses being affected, is news.)

The controversy may be about a public policy that should changed; unfair restrictions, fees or taxes; or concerns about the environment.

Be able to show how your issue impacts the local community. Trying to solve a problem or bring about positive change gives you and your group credibility. Statistics are especially helpful, as are dollar figures.

Present a united front: try to show that more than just a few people feel the same way; have lists of groups, clubs, boating organizations in the area that support the issue.

If appropriate, show your issue is part of a bigger trend. Journalists are always looking for trends to report on; for example, a local marina being sold for condos is part of a larger trend in which public access to the waterfront is being lost to private development. Local papers are often looking for stories to tie their community to a national trend.

If another press outlet is already doing a story, you might mention it. No reporter wants to play "catch up" when a competing news outlet beats them to a story first.

DO NOT expect any reporter or editor to know anything about boats or boating. Be patient, explain things in the simplest manner possible and don't speak "down" to them.

Press releases are the lifeblood of media outlets and the source of many good stories. BoatU.S. receives dozens of press releases daily and sometimes they become stories in BoatU.S. Magazine, Facebook posts, or evolve into other projects.

A well written, concise press release can get your issue the news coverage it deserves. Short of calling or e-mailing a reporter or editor, a press release is the next best thing in getting coverage.

A press release should be short and to the point and kept to one page.

The news "peg" of the release should always be at the top of the release, in the headline and first paragraph. Make it as compelling as possible, keyed to the importance of an issue. Saying a "Meeting is Scheduled for Wednesday" is boring to any news outlet. But saying "Rash of Accidents Raises Concern" is bound to elicit more interest.

The release should contain enough information to interest an editor or reporter and provide contact information with a phone or cell number that will be answered by a person, not a machine. Reporters and bloggers often work odd hours so having someone available by phone, even at night, is important.

Mail or e-mail (or both) your press release with enough lead time for someone to either attend the event or pursue it as a story.

Be fully prepared to send out multiple releases. For some major events, groups start sending press releases months in advance, and follow up with reminders right up until the event.

Don't be discouraged if your initial try is ignored. Perhaps it did not get to the right person or you hit the news outlet on a bad week when some other major news was breaking. Keep trying. When editors see multiple releases from the same source, it shows them this is not just a one-shot effort and perhaps deserves some attention.

For a current or future issue, the best thing local boaters can do is cultivate local media contacts. These can be crucial to you when issues come up at a later date and you don't have to start from scratch to get coverage.

If a reporter does cover a local issue or event, be sure to thank them for taking the time and offer any additional information.

Follow up on a story or news broadcast with the reporter, offering to keep them informed of any new development; Offer any new leads or angles for future stories they might want to run.

DO NOT complain about coverage you receive, unless there are factual errors. If there was an inaccuracy that is important enough to point out, do it in a nice way by letter or e-mail.